an month of photo hunting - April

craft
making progress with my hexagons. assisted by my ever present helper.
Apparently this is His sunny spot.... 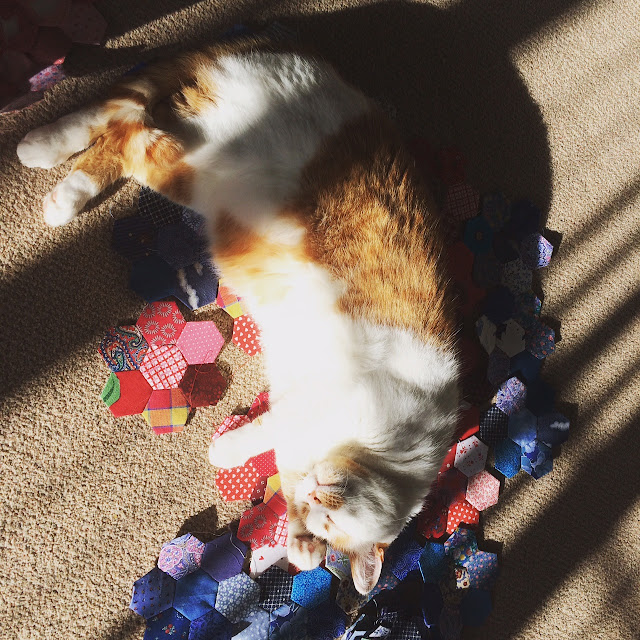 Horizon
a gorgeous sunset sky over the estuary. 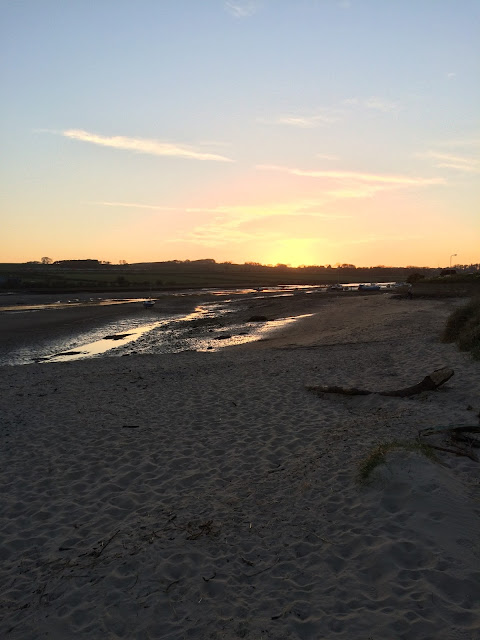 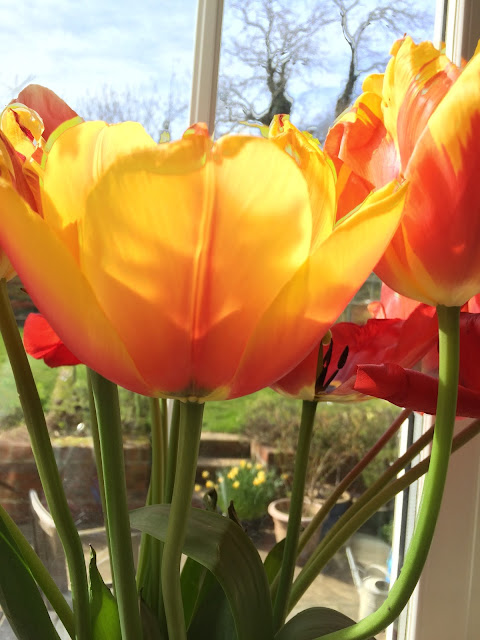 something else
teenage boy's idea of how to cut a cake into 1/6ths. I told him to cut it in half and then cut one half into three pieces. This wasn't quite what I meant........... 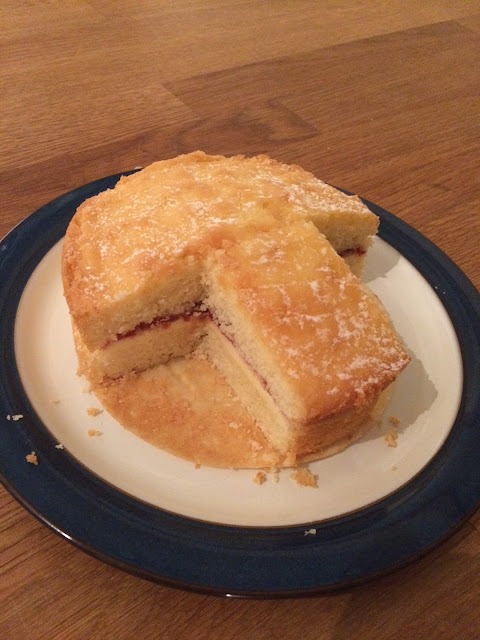 stick
foraged beach treasures, a long piece of driftwood and some rope. looks like some kind of crazy crochet apparently. I have other plans for it......... 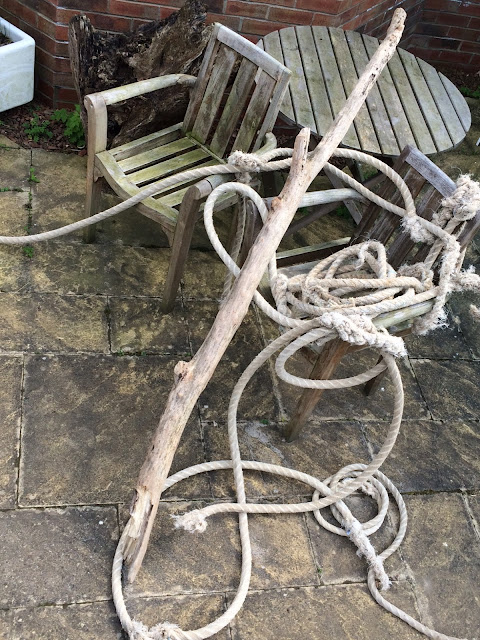 growing
tomato seedlings on the window sill. could be a while before they make it out to the greenhouse, it's freezing in there. 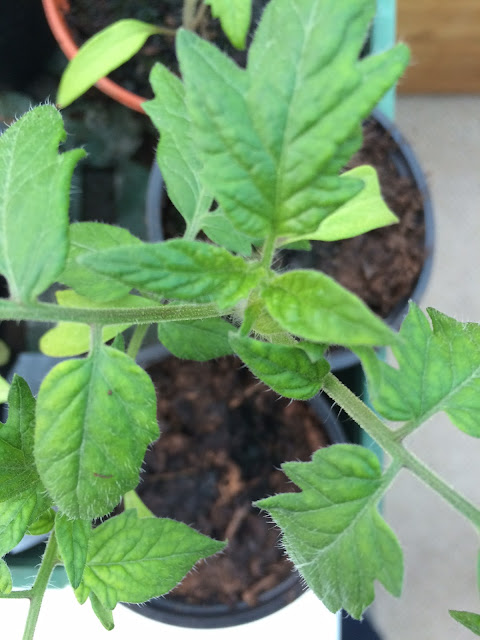 memories
the aftermath of the flood at my mother in laws. We salvaged as many of the photographs as we could, these ones curled and needed carefully flattening..... 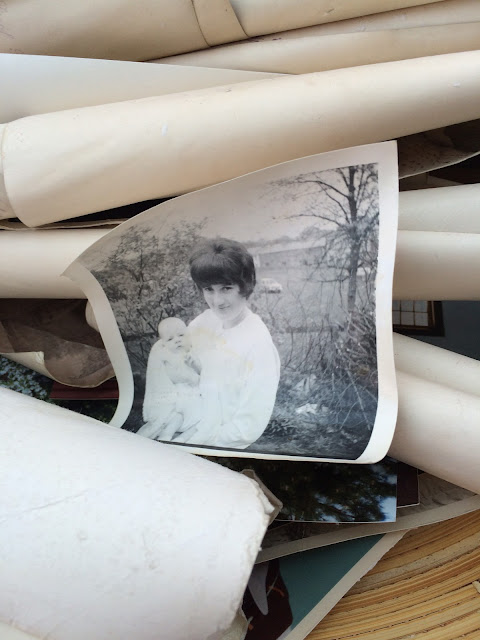 fresh
well it certainly feels fresh outside. It's May in two days...... 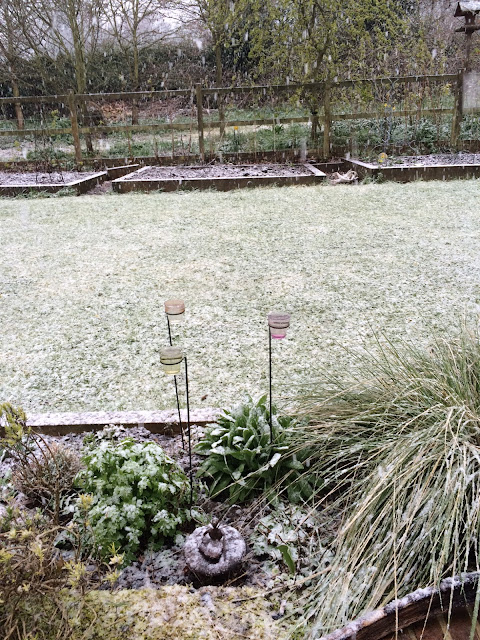 feather
treasures from the notice board, everyone has paper feathers next to the list of emergency phone numbers don't they....... 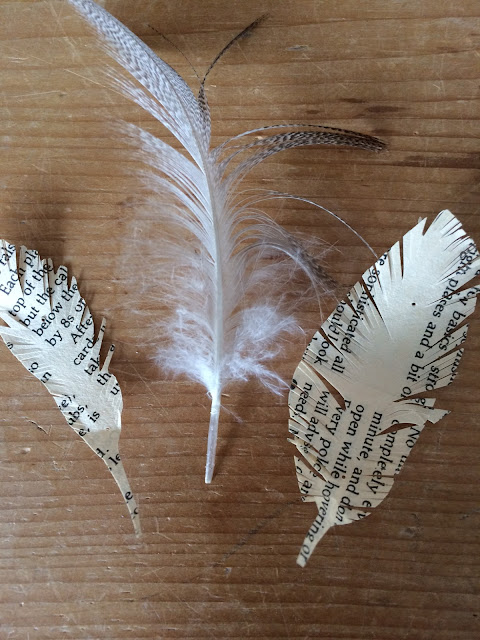 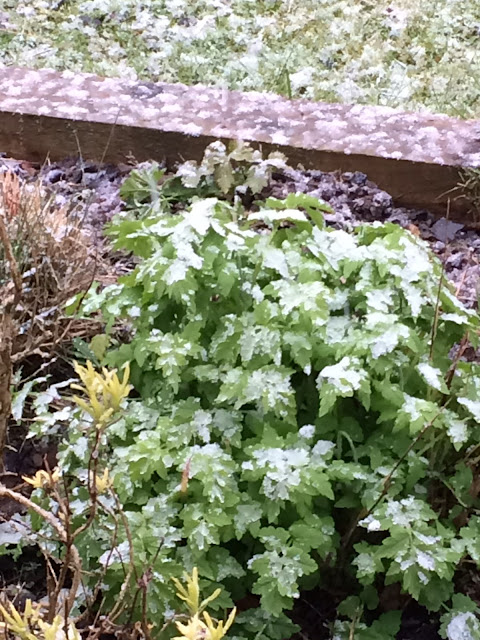 hope you have a lovely weekend everyone, are you doing anything exciting?
I'm looking forward to May.   Surely it won't snow in May.....
Really don't want it snow on Sunday, K is running her first half marathon. I shall be waving and jumping up and down to keep warm.......... 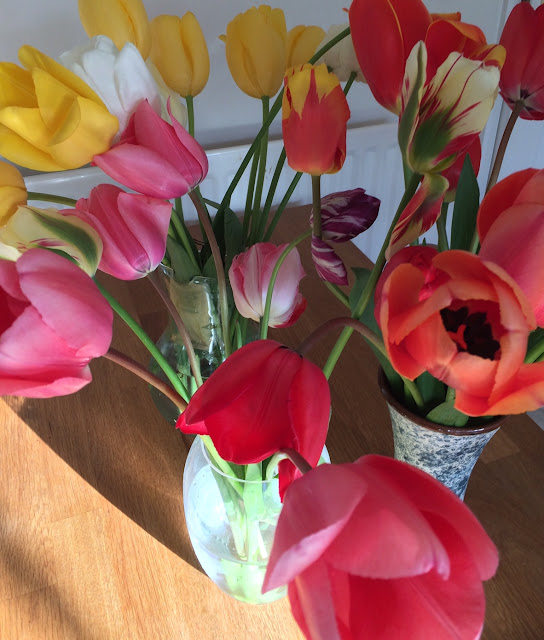 Thank you for all the marmalade advice, I think I may be better at eating marmalade than making it.
I shall embrace my inner Paddington Bear. 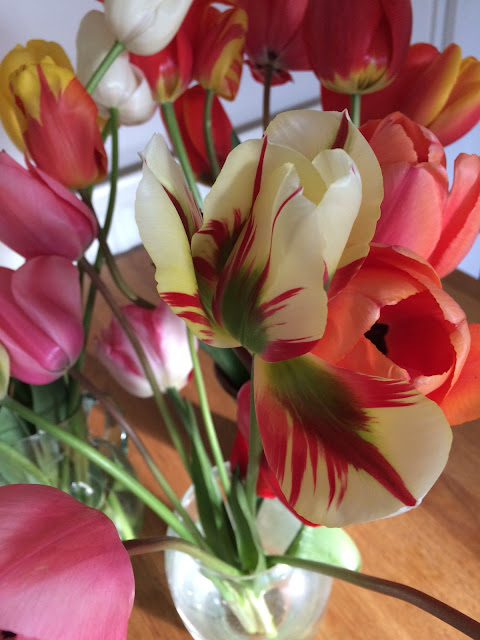 We arrived at 5.30 to find that although the program says collect between 5 and 6 they actually mean arrive at 5. 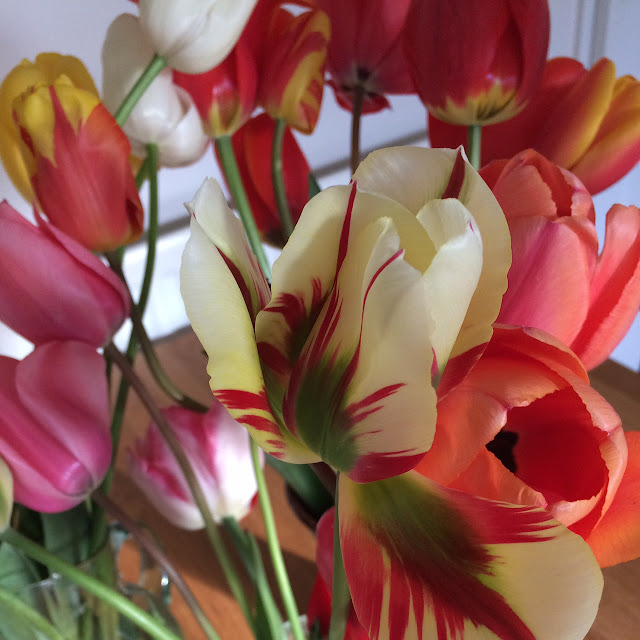 Then they start emptying out the uncollected flowers and throwing them away.... 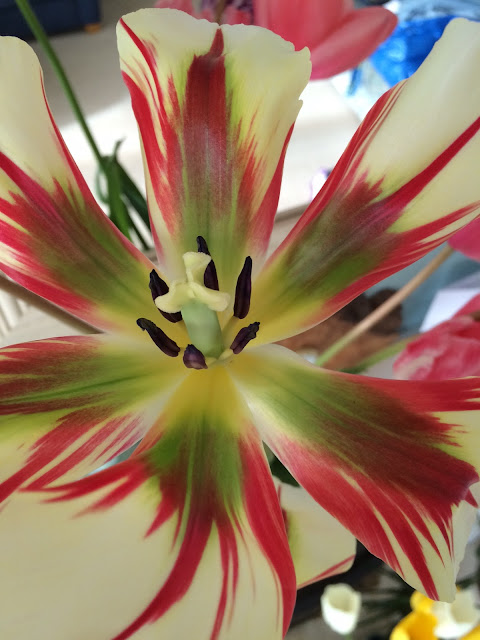 It's ok though. If you apologise profusely for your lateness, and look a little sad that your very pathetic floral offerings have been disposed of, then the nice ladies will give you the uncollected tulips. All of them! 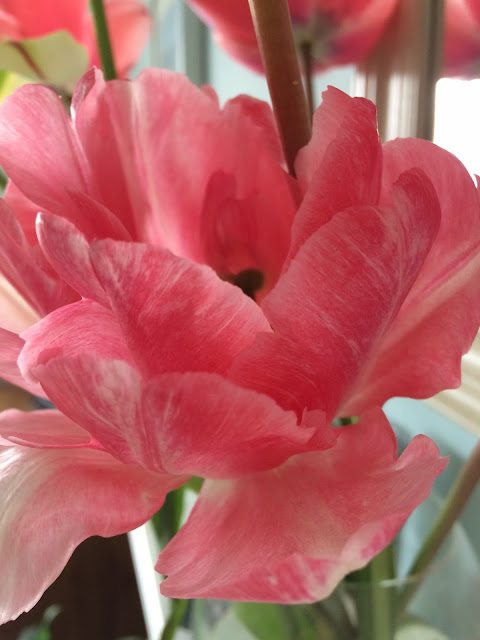 a feeling freezing five on Friday

1)
brrrr it's chilly. I've spent all week looking at pictures of sunshine and spring flowers  from the south of England on instagram and wondering why I'm so cold.
oh that's because this is the north.....

2)
I am waiting impatiently for signs of spring. And warmth. The only spring there is round here is a new coil spring for front wheel of the car when it had it's MOT yesterday. The lady who rang me told me it needed it, how much it would be (ouch) and then that it wouldn't pass the MOT without a new one. So did I want it fixed? Urm let me think about that for a minute..... Honestly..... no I want to drive around with an unsafe and illegal vehicle........

3)
It's the local spring show tomorrow. I've just been out in my freezing garden (did I mention I was cold?) to try and find anything suitable to enter.
Everything is either
a) chewed - mice? pigeons? daffodil climbing snails?
b) rain battered and mud splattered
c) not flowering yet. it's too cold...............
d) fairly pathetic but none of the above so it will have to do........

4)
I also found a jar of marmalade to enter.  (I found that in the cupboard not the garden by the way....)
There seems to be a great deal of variation in marmalade recipes. Some chop the oranges, then boil, some boil them whole and then chop. Should the chopping be fine strips, or is it ok to throw the whole lot in the food processor and whizz it? Which is right? I have marmalade angst.

5)
I shall not be entering any baking.There are no classes for dairy free/gluten free cakes, and they never taste quite the same as a muggle* cake, so we'll just admire other peoples efforts. Also All baking classes at all the local shows are won by the same lady. I am somewhat baffled as to how she makes 15 or 20 cakes for each show. How big is her oven. Does she buy sugar by the ton? Does she make 20 of each at the same time, defrosting one each time she needs it? Or does she have a time machine?


So any marmalade tips? Any signs of spring and sunshine where you live? And if so you can send some up here please! I'm off to make a pot of tea and try and get warm.
Have a lovely weekend x

joining in with Amy's five on Friday.


*In the Harry Potter books a muggle is a person who lacks any magical ability. In our house a muggle is someone who isn't gluten free....
Posted by driftwood at 12:54 37 comments:

not quite your normal game of monopoly. 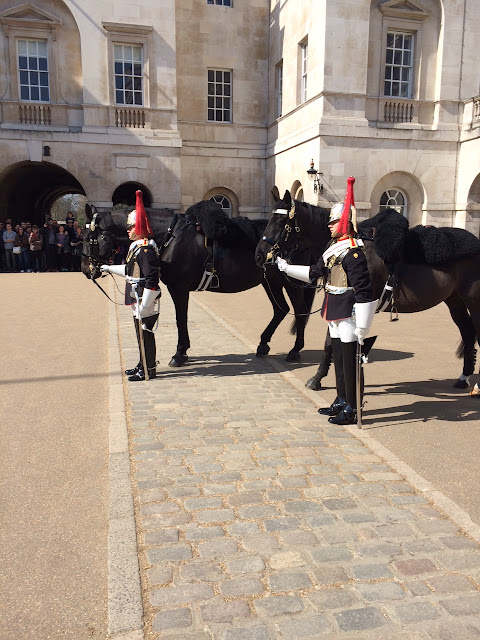 Changing of the Guard at Horse Guards Parade.

The Planning.
Sometime in January I signed E up to do an explorer* event in London. And promptly forgot all about it. Over the Easter weekend I got an email with details of the event, followed at 11pm on Sunday night by a frantic email from the main explorer leader, requesting parental help. He'd booked the event, but he now couldn't go, and neither could the minibus. He had one leader but would any parents (with DBS checks) be able to drive to London on Friday.... J and I had one of those crazy very very late at night conversations, which went mostly like, "well if we don't go then who will?" Cue frantic collection of camping kit, travel cards, phone chargers, food, extra food, emergency car snacks.... 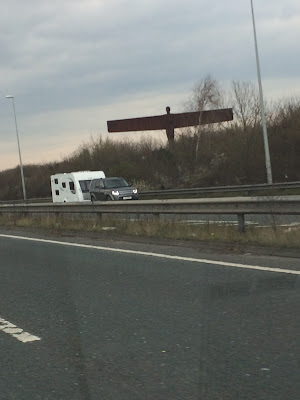 The journey.
It's 313 miles from here to the scout park in north London. although if you don't check properly you think it's 270 miles, and when you realise with 30 miles to go that actually there's 73 miles to go everyone gets a bit tetchy with you. just saying.....
J left work early so we left with a car full of explorers at 3pm instead of the scheduled 5pm. Two stops, five sets of road works, some crazy traffic, and 7 hours later we arrived.

The most frequent saying of the whole trip was "Imagine if we'd left at 5 o'clock!!!!!!"

We played eye spy, two letter eye spy (EP - electricity pylon, not elephant poo!) and the A-Z game, themed to the weekend, "I went to the shops and I bought an A-z map of london,  Bow Street, Chocolate, Diagon alley, Eager teens, etc" and sang loudly and tunelessly all the way. 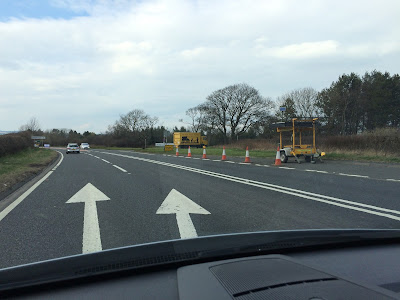 The Beef Jerky Van. This bright yellow van, always parked at the edge of the A1 is the sign that you're nearly home. Everyone cheers when they see it! 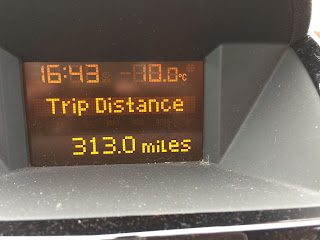 The Game.
Monopoly Run.  This year over 900 scouts/leaders/senior section guides and crazy parents raced around London, seeing the sights, earning "£'s" taking photographs and tweeting them. Each team had a list of locations and challenges, you had to visit as many of the locations as possible, some of them at specific timings, answer the location specific question, take a team selfie, and tweet it with the location hashtag (#Trafalgarsquare) and your team number back to head quarters, and rush to the next place. You could do them in any order, more £'s were earned for further away or harder to get to sites, some were genuine monopoly board locations, others were changed in order to make it different each year, and to get a fantastically varied view of London. Team selfies had to be varied and include a variety of poses, and extra £'s were earned for "Chance cards" eg take a photo on a Santander bike, with a member of the public, with a police man, and everyone in your team in a phone box,  or "Community Chest" locations, eg The Royal Albert Hall, or a Trafalgar Square Lion.  You had 9 hours to visit as many locations as you can, before returning back to "GO" at the campsite.  Our explorer group fielded a team of 7 explorers who came 18th out of 142 teams,  and J and I and a leader made up an adult team. I learnt that my geographical knowlege of London is dreadful, and that I am much more comfortable navigating with an OS map than with an A-Z and a tube map, that camping in April can be chilly, and that tweeting in a hurry can lead to a) not including the photo, b) not including the hashtag, c) typing the wrong #.... and d) general grumpiness. I also learnt not to use the steps at Covent Garden tube station, that London is a crazy long way to drive, and is filled with far too many people, but is beautiful and inspiring, and has so many more places than I'd ever imagined and we have to go back again next year, and try and visit even more locations. 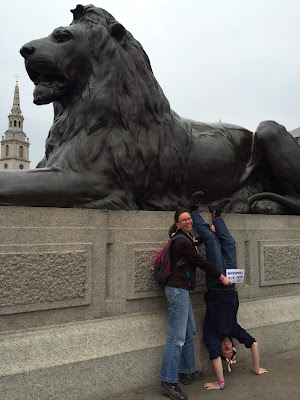 Oh and the second most frequent saying of the trip.

"is that your feet I can smell?"

* explorers are a branch of the scouts, for children aged 14-18.