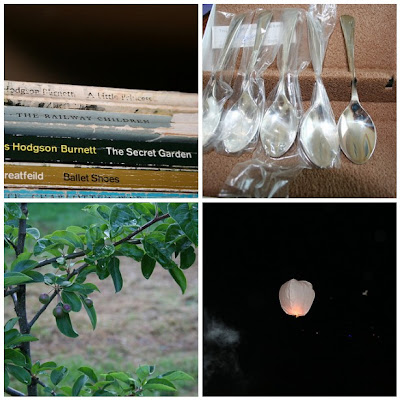 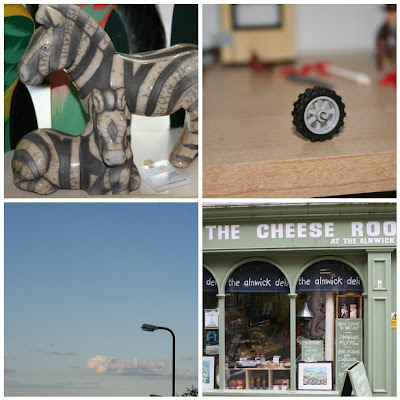 beginning with z - zebra, wheel trim - lego
view from the door, cheese - a whole shop of it! 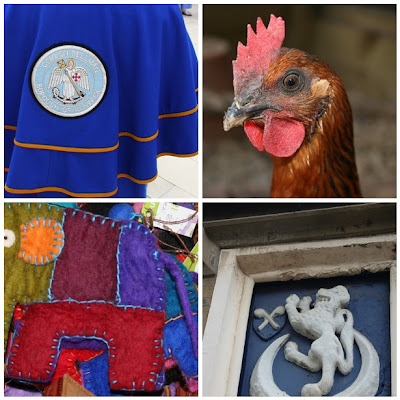 I took most of these today with two helpers who were off school, it's much easier with helpers!
Posted by driftwood at 22:40 11 comments:

wonder vitamins and oh boy did I need them

good grief I don't feel like my feet have touched the ground recently, preparing for the arts festival, the event itself, a hog roast we were co-hosting - did I forget to mention this, yes we had a street party in our garden co-hosted with our next door neighbours, and invited the whole street, plus a few extras so that in total we had 29 adults and 11 children. I was enormously thankful that the rain of the morning eased off, and that all most of the time most of the people were outside! The last people left left at 11.30pm, the clearing up went on a bit longer than that..... and then I was back at the stall at 9.45 the next day - which was bakingly hot, and I longed to walk on the beach and not be in a rather stuffy room....... oh and now we're getting ready for my mum's 80th party, this morning I have been out and bought gorgeous candle lantern stakes, and found sparklers in the garage leftover from bonfire night, and there's a long to do list....

the arts festival itself went really well, so thank you all so much for your lovely supportive comments, I met some great people, felt really part of a fantastic community event, and managed to resist spending Too much money on some of the incredible talents that were on show. I did get a few treats, and I'll photograph them later.

anyway as I mentioned last week I was sent some vitamins to trial/review from B Record Plus and whilst it is so incredibly difficult to know whether something has had an effect, as you can't tell how you would have been without it, I do think that having had some extra help this week has been incredibly useful, and although everything was extremely tiring I did still feel great for most of the time, whether the effect of the vitamins, or the placebo effect or adrenalin to get me through I can't be sure but I'd like to think they helped, and I'm still feeling full of beans so to speak so the effect seems to last longer than the 10 day dose. There's loads of scientific sounding stuff on the website, and here , which will try to convince you of it's virtues, I have to say I'm not one to be baffled by science, and whilst some of it sounded superficially good, I wasn't convinced by all the technobabble. but then I'm a cynic when it comes to science, a little knowledge is a dangerous thing, so perhaps I am just being a humbug. Most likely this in fact as I get very cynical about the scientific stuff about moisturizers and makeup etc too....so in my truly unscientific opinion;


thank you B Record Plus for the sample, have to go, I've got birthday bunting to make, one or two empty wine bottles to go to the bottle bank, an extra choir rehearsal tonight, a cottage picture to alter, a heap of stuff that needs to find it's way onto folksy, and one day I soon I really need to finish E's quilt, it is beginning to haunt me.....

hope you are all enjoying the sunshine, and that's not too hot for you, it's just about right here, and I'm loving it. x 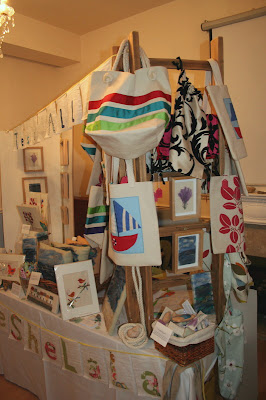 the stall is all set for the Alnmouth Arts Festival, 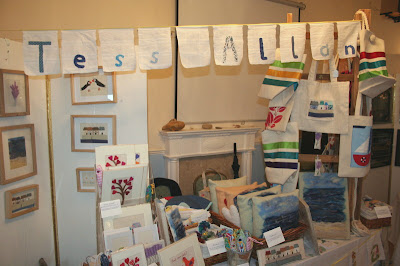 tonight was the preview evening, and I am now enjoying a much needed cup of tea. 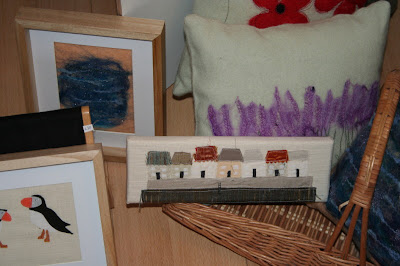 tomorrow I am going to wear much comfier shoes...... 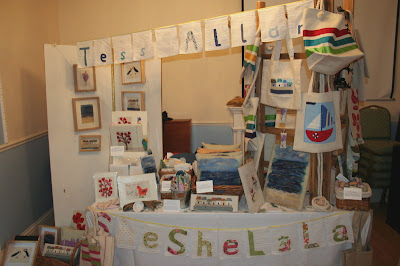 my friend sheshe-lala brought her gorgeous bags, and we had loads of fun setting it up. you can't see the gorgeous ladder turned into amazing display unit as we've laden it with bags, but it's under there, and you'll have to take my word for it, it's great. I can tell we're going to have a fun weekend, we've already met some lovely people, and in a magical moment of blog world meets real world I met Primrose Patch who came up to introduce herself, it was lovely to meet you!
Have a lovely weekend everyone, I'm looking forward to Monday, there are hundreds of items in my google reader and I'm planning on spending a whole day with tea and cake and a laptop and catching up with you all. till then......
Posted by driftwood at 22:44 8 comments:

June is a busy birthday month, first there was J. I have a huge confession to make. in fact this accounts in part ( ok a lot) for my prolonged abscence. I am embarrassed to admit it, but honesty is important amongst friends.
I bought his cake

Next it was my birthday and I got some gorgeous gifts from kind friends and no photographic evidence... I had two cakes, both homemade, (one by an aunt who bought a gluten free mix and made it for me, I was truly delighted.) There are no photos of the cake either, but I have a few extra pounds of weight to prove they are eaten.....

Tomorrow is my mum's 80th. They have just got back from 2 weeks in Boston, I am hugely envious of their travels, and their energy. I was tired just navigating the airport carpark when I went to collect them.... She is having a party next weekend, I will try very hard to photograph That cake....

Amongst the birthdaying, I have been readying for the Arts Festival, it starts on Friday. I currently making labels, I'm not really on the laptop writing to you at all. Or at least I should be but... In fact I should be doing at least 8 things right this minute, and my head is spinning with all of them, so it is a bonus that I got sent a review parcel of some new vitamins - B record Plus, to bring me energy. I will write it up properly when I've finished the 10day course, but so far so good.

E: what are you doing mummy?
me: I'm helping daddy make this new flower bed.
E: More flower beds! Why do we need More flower beds?
me: because daddy doesn't buys me flowers, instead he's building me a flower bed I can grow some.
E: why don't you just buy your own flowers? 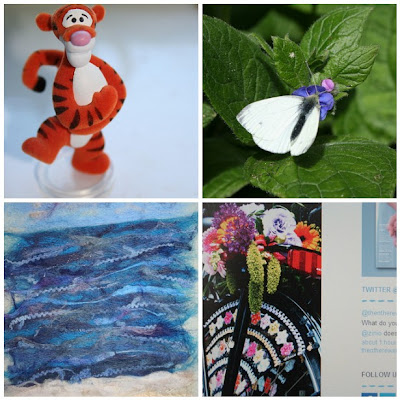 tigger, a fave cartoon friend, a butterfly,
something blue - in wool you can make the sea blue, often it's grey!
a bike - courtesy of mollie makes - oh so pretty! 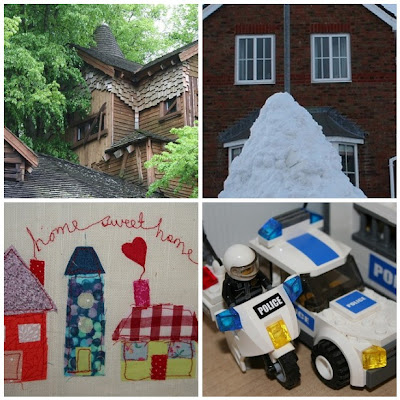 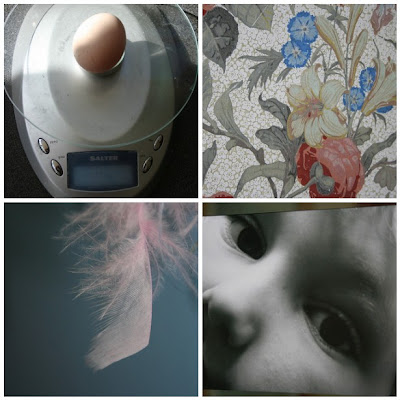