we've got a visitor from the States coming on Thursday. can you feel me bouncing up and down with excitement!
I've been making gifts for her to take back to the rest of the family that couldn't come.
Dino t-shirts, decorated with some scraps left over from a dino wallhanging made for E's bedroom. 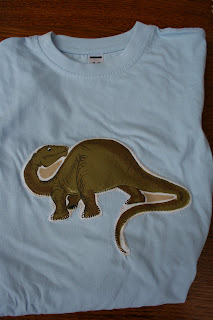 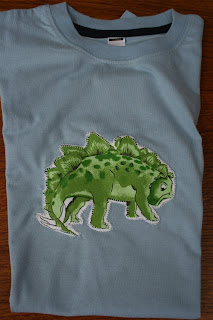 and for a new baby due in June something to send to the baby shower. I wanted to use this fabric that my friend whose coming bought me last year, as the baby will be a new grandson for her.
but it was really hard, as the fabric was already striped, and like a quilt, so what to do with it?
In the end I went with the stripes, cut it up along them, inserted new stripes and sewed it all back together. 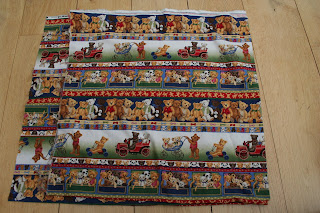 It's backed with fleece, rather than wadding and a fabric back, so I guess it's more of a playmat than a quilt, and I learnt a valuable lesson, instead of trying to save time and sew both the sides of the binding with machine I should just do it properly, which is what I did, AFTER I'd done 3/4 of it the other way, decided it looked truly terrible, and then spent over an hour unpicking it.... great time saving that was... 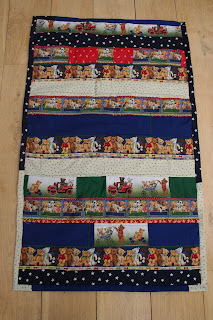 Miss K was at sewing club this morning, so there should be some of her sewing to show tomorrow. E got there, saw they were making dolls and announced he wanted to go home....
so we went home, and when we went back to get Miss K later
"can I make one of those dolls that K is making, I want to make Captain Underpants"
so tonight we have to get E to the same stage as Miss K so we can ALL got tomorrow.....

who says girls are fickle.
Posted by tess at 13:15