more WIP's and hints of things to come

no more progress on the last works in progress, so instead here are some new ones, a rainbow quilt following on the theme of the blue baby quilt, this one is going to get a wide white border added to it, as I think it's too small, and then I'm taking them both on Wednesday to show J's colleague who wants 2 baby quilts. 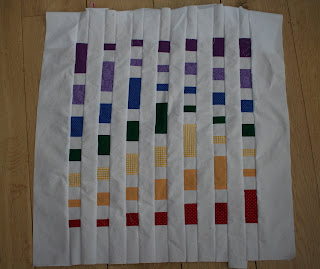 I've had such fun with this one, that I spent 2 hours on Saturday night "designing" or as J described it "colouring in" so there will be another one of these soon, and hopefully a tutorial -- eek , if I can work how to write one.
and because it's nearly my 100th post I've started something for a little giveaway, so here is a sneak peak at a prize in the making. 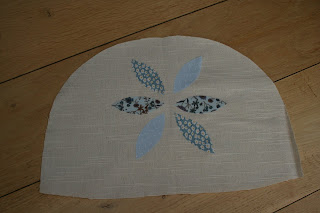 hope everyone had a lovely weekend.
back tomorrow with photos of captain underpants who is feeling neglected as he hasn't been photographed yet....
Posted by tess at 08:23