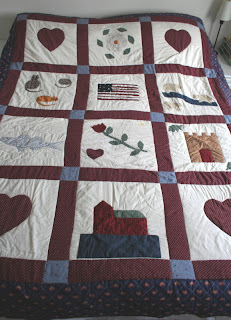 as Friday's forecast was dry I finally got round to doing something that has needed doing for EVER, but I've putting off all summer with the excuse that it wouldn't dry but really because I was worried it would be a disaster. --- I washed my quilt. This is the first quilt I made, I had no idea what I was doing, so didn't pre-wash any fabric (therefore was terrified it would run) I had no clue about wadding, so I've no idea whether it was machine washable, the stitching is decidedly dodgy, the applique is very loosely stitched, and the quilting - well lets just say I've got better........

but it really really needed a wash, there was a random pink stain (which didn't come out, but at least didn't get worse), some tea stains (very cross about those - I'm very careful about my tea in bed) and some muddy cat paw prints (humph I'll make those cats wipe their feet on the mat next time!). so into the bath it went, with the mildest of washing detergents, and then a rinse and gentle spin in the machine, and finally a few hours on the line. I wash so relieved it had survived it went straight on the bed, although judging from the photos it could have done with an iron first. ...

I made it when we lived near Boston, I had no idea what I was doing, and taught myself applique out of a book, designing most of it to include huge borders to cut down on anything difficult! It includes a white rose of York, a castle from the town hubby grew up in, our 3 cats we had before we got married and moved to Boston (they got farmed out to family, and we never got them back), a striped Bass - J's obsession the whole time we lived in Rockport was to catch one, some bears we never saw when we camped in Maine, and so that J never has an excuse to forget our wedding anniversary the date of our wedding - it's worked so far, he hasn't forgotten an anniversary yet.

today's jobs include a very serious amount of pruning in the garden, and K and E pounced upon all the branches with glee, decorating the climbing frame to create a giant den/tree house. 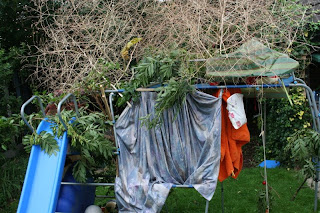 which provided hours of entertainment until the heavens opened and the train set came to the rescue and saved the day.
Posted by driftwood at 19:30