a walk of mountains and Spanish skies

Shall we take a walk? Blow away the cobwebs and the stale airport air, get away from the hustle and bustle and head for the hills? Find space to breathe and time to relax.

Where shall we start? How about Montjuic, described as a breathing space away from the city it is home to magical fountains and the Olympic Park. 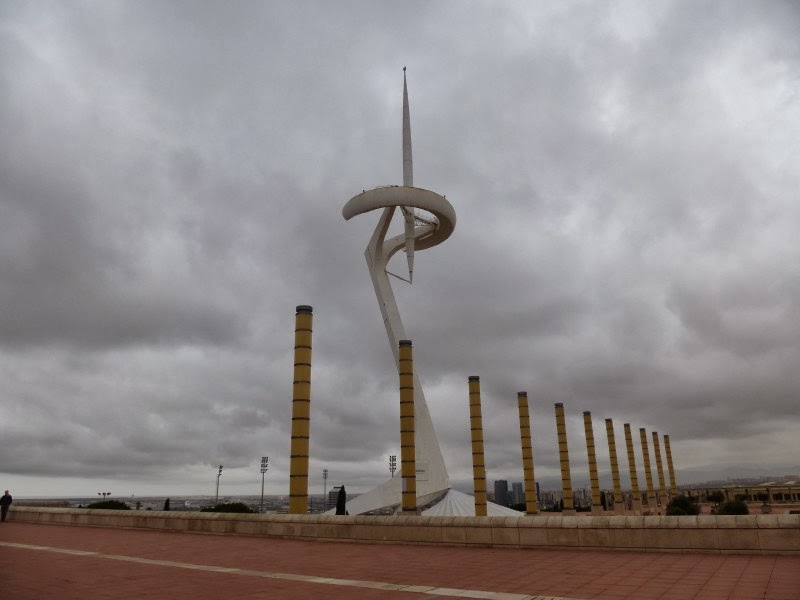 in Bilbo's travels in the Hobbit (#ayearinbooks), he crosses the lonely mountains, I have to say Mount Montjuic was fairly deserted, a few cyclists having fun on the hills and some children making use of the sports grounds, but hardly a soul to be seen. 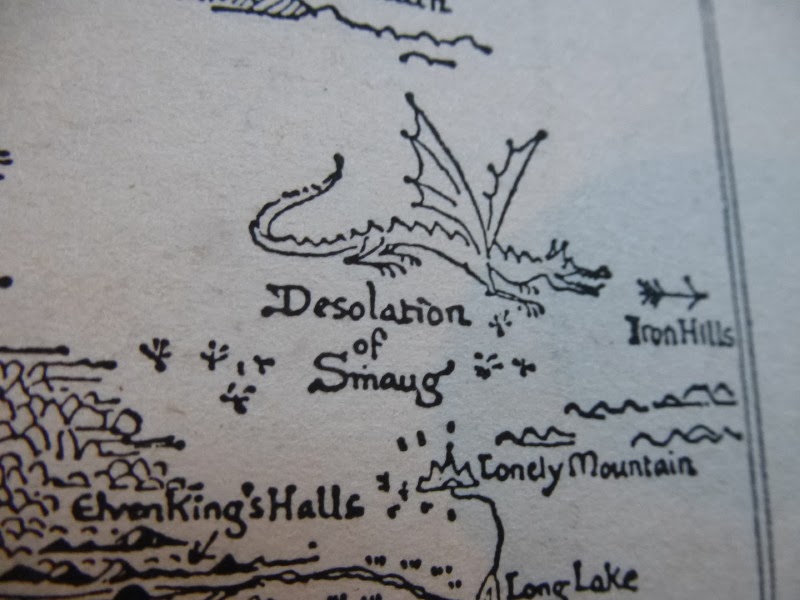 Plenty of sky though, a little grey at this point, but it is January after all... and it's not -2 C as it was when I left for the airport.... 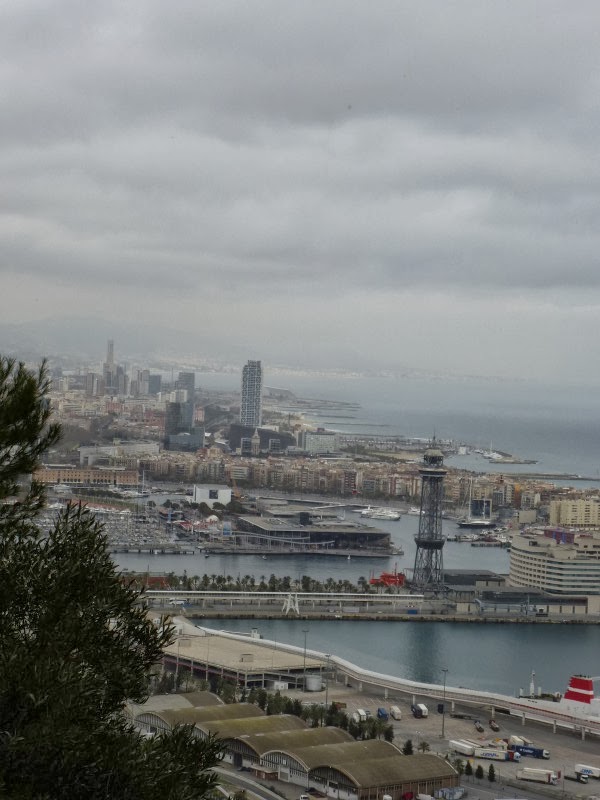 looking down from the Castle Montjuic we can see the sea, stretching into the distance there are beaches and yachts and a death defying cable car. no ride for me, no thank you. 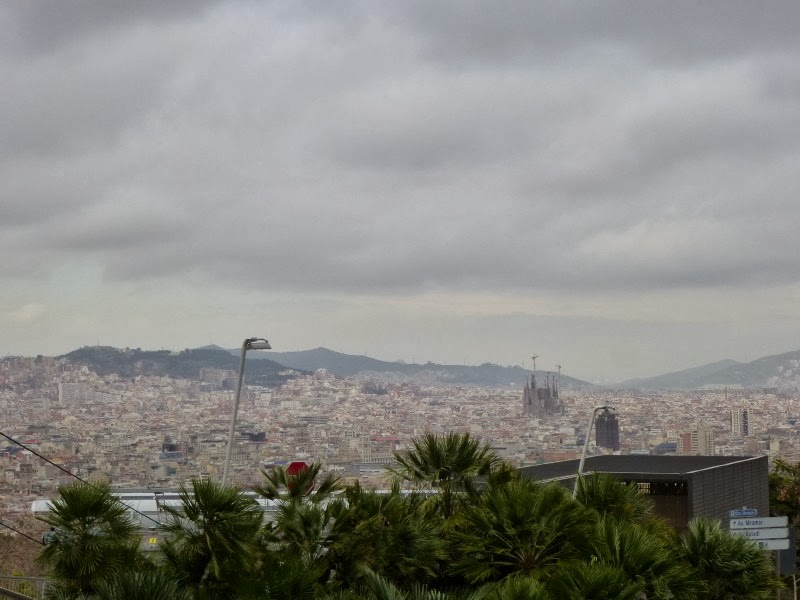 Where next? Let's see. Look there's a cathedral. Let's go there. "Is it far?" we wonder. 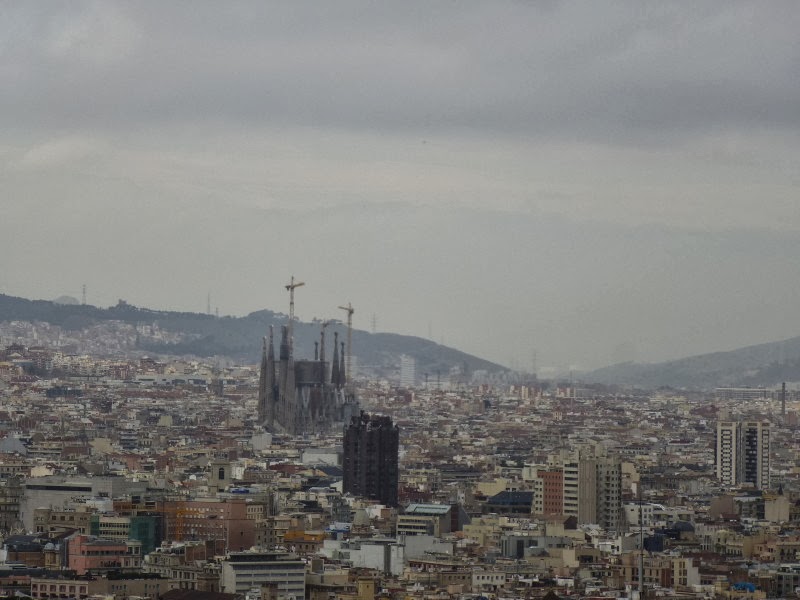 What's that you say? There are hundred's of people and it's noisy and crowded. You want to go back up the quiet mountain. Yes me too.  How about we have some truly delicious food and some sleep and then we can head north. 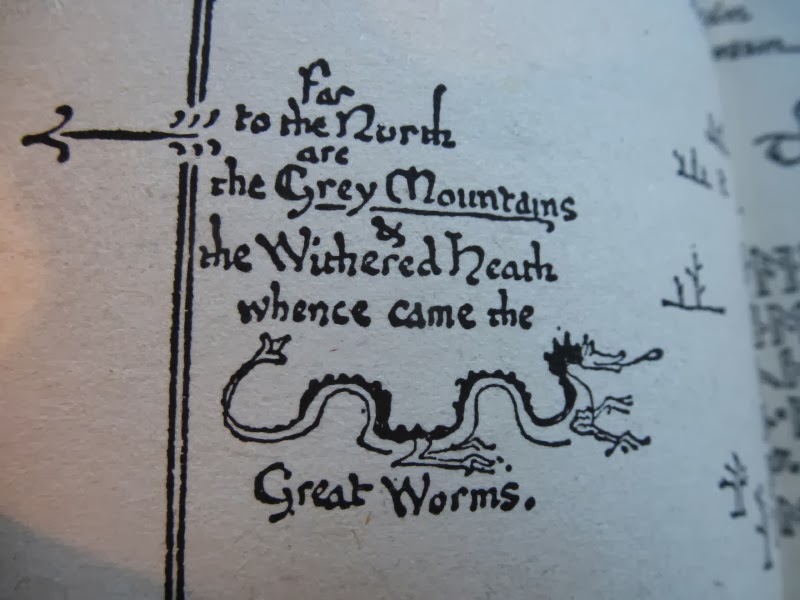 "Far to the north are the Grey Mountains" and in Barcelona's north you will find Mount Tibidabo, the tallest peak in the Serra de Collserola. The name is derived  from the latin phrase, meaning "I will give to you", which was said to be said by Jesus to the devil as they looked down from an exceedingly high mountain upon all the kingdoms of the world, and refers to the popular tradition that it is in fact the exceedingly high mountain itself.
Upon the top is the Church of the Sacred Heart of Jesus, and a fairground of all things.... 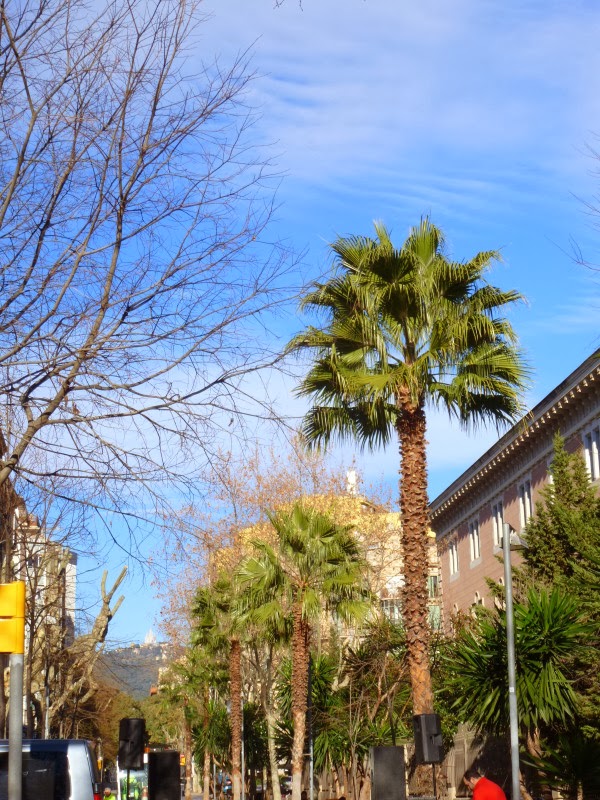 Here it is, peeping through the tree tops as we set off once once more.
Please note the blue skies. 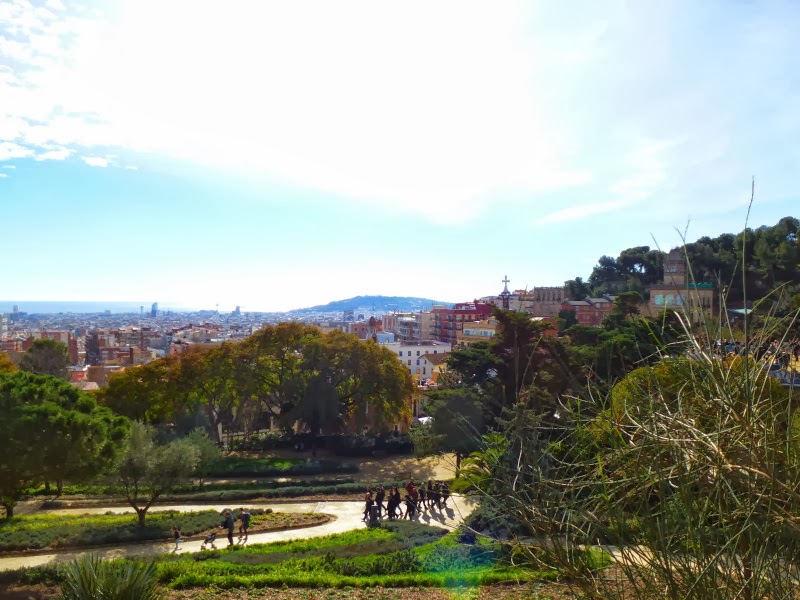 As we walk we pass beautiful museums, incredible architecture and impossible cathedrals. but we can't go inside.
No.
These are the first blue skies we have seen for months.
We need to be Outside.
And so we walk.
Pausing to buy a drink we ask the shop keeper to check we are going in the right direction for we have walked off the edge of the map.
he spoke as much English as we speak Catalan, but we managed.
"Parc Guell" he points,
and scowls. "muchos touristas" 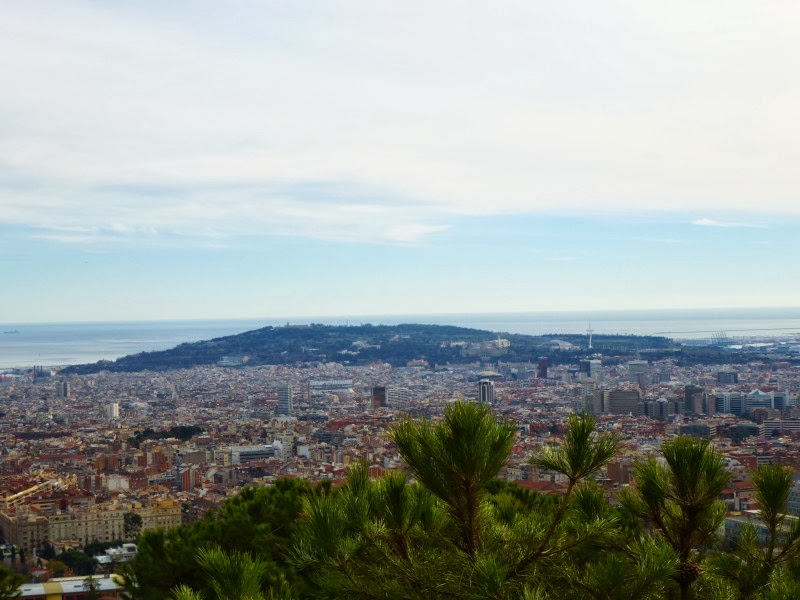 he was right. many tourists indeed. so we keep walking, upwards and onwards,
and look, can you see where we were yesterday, there is the tower in the Olympic park.
And on top the the hill there is the castle from where we saw the sea. 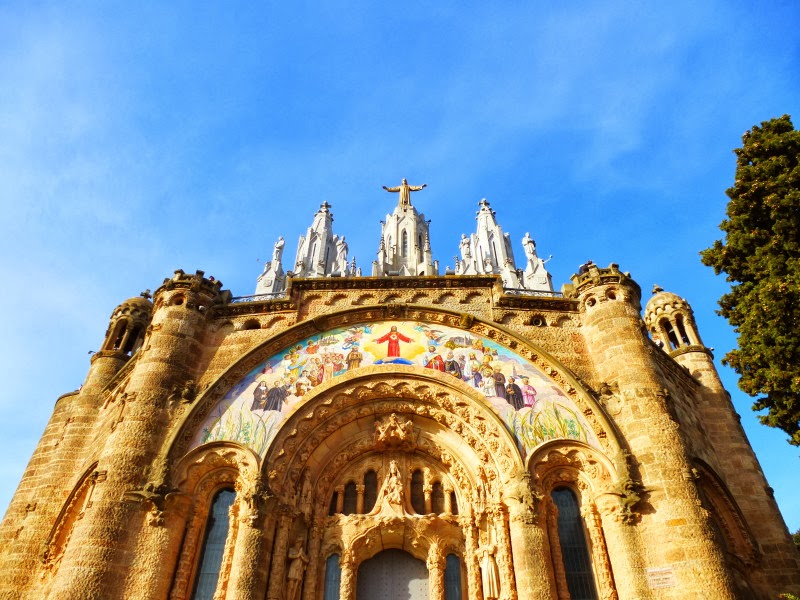 We are almost there. Apparently most people take the metro or a bus to Avenida del Tibidabo, and then the tram to Plaza del funicular, but lets carry on walking shall we.
After all look at those skies.
And now for the last few miles. Sorry, the funicular doesn't run in January, but we can stroll through the woods, along the Carretera de les Aigues,
up and up and up until we have reached the sky. 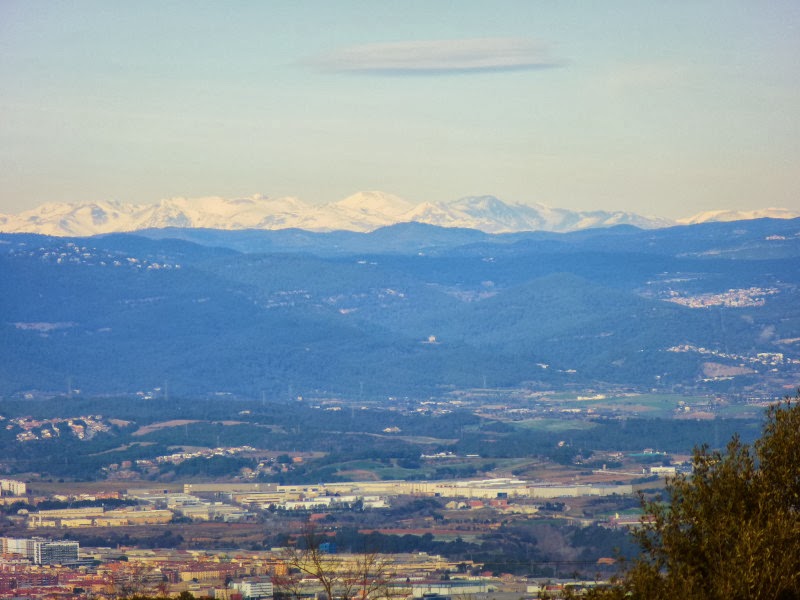 and we can turn around and see mountains of snow stretching far into the distance.

now we turn around again and head slowly downwards the way we came.
in search of tea.
and maybe some cava.
2 days. 28 miles. Apparently the best way to see Barcelona is on foot. I can agree with that. 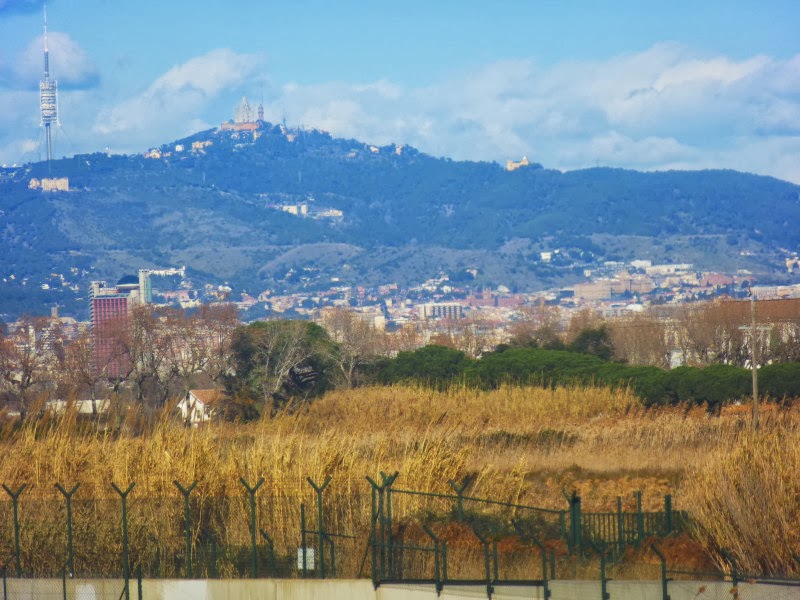 looking out of the plane window as we leave, we see the church we have walked to high upon the hilltop, and feel like we have a left a bit of ourselves behind.

The city is a sorceress, you know, Daniel?
It gets under your skin and steals your soul
without you knowing it . . .’  Carlos Ruiz Zafon.